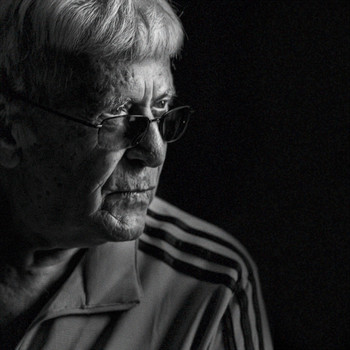 Sid Maurer is a man with many stories.

His long career in the world of Art and Music began at seventeen when he was hired as assistant art director at Columbia Records in New York City, where he spent weekends playing trumpet in Jazz clubs for extra money. In the period that followed, the music business exploded, and Maurer worked designing album covers and promotional material for popular artists.

His co-worker at the time: a young artist by the name of Andy Warhol.

As Andy left to pursue a career in "serious" art, Maurer expanded his commercial art studio to tackle a wide range of projects for the music and film industries. His position brought him into contact with a group of artists whose names are well-recognized today, from Pollack to Rauschenberg, and Maurer was strongly influenced by their work and ideas as he developed his own unique style of painting.

Throughout the mid-sixties, Maurer continued his work for the music industry. He worked with famed British recording artist Donovan, developing album covers, poster designs, and even a film for Warner Brothers. It was during this period that Maurer's work as a painter first gained recognition, appearing in galleries in New York, Los Angeles, and Paris.

In the early nineties, Maurer realized that the empire of music and art that he had helped to build left him little time to pursue his true passion: painting. He moved to Atlanta where he has lived ever since, developing a vast catalog of works and perfecting his personal style. In the last decade, his work has hung in a wide variety of venues, including the Georgia Capitol, the Carnegie Museum in Oxnard, California, and the U.C.L.A. campus.

His commissions include work for organizations like ESPN and MotorSport America magazine, as well as for individuals such as David Bowie, Boy George, and his old friend Donovan.

His recent works vary widely in subject matter, addressing fascinatingly disparate elements within our culture. Maurer's series "Vanishing Georgia", made up of 30 paintings, depicts key events and periods in the history of his new southern home. He also celebrates the heroes of our culture in "Sport Legends", as well as the personalities that entertain us in series' such as "Movie Stars" and "Famous Musicians".

As a painter, Maurer creates large mixed media pieces that are very much a product of his varied training and experience. His style combines bold, dynamic colors and strokes with painstaking layouts and typographical elements. The result is the unique blend of a painter's passion tempered with the calculating compositional eye of a graphic designer. He explores his themes and subject matter primarily through symbols and personalities evoking pride, nostalgia, and hope.

His newest work, from the series "America, America", and "The Great Americans", depicts the symbols of our nation, as well as the heroes to whom we owe our freedom (from George Washington to Martin Luther King). These works were born of Maurer's reaction to the 9/11 tragedy and the apathy toward America that he perceived on the part of many of her citizens. As the child of immigrant Jews who escaped the Holocaust and as a participant in American art and music, he has a strong emotional attachment to his subject. He challenges us in his painting and in his words:

"Wake up America! Celebrate your country and its symbols of freedom. We Americans have had many father figures: Washington, Lincoln, and Martin Luther King, among them. They belong not only in our hearts and memories, but also on the walls of our homes, workplaces, and public buildings; they deserve that honor."
© Sid Maurer
Powered by ZENFOLIO User Agreement
Cancel
Continue